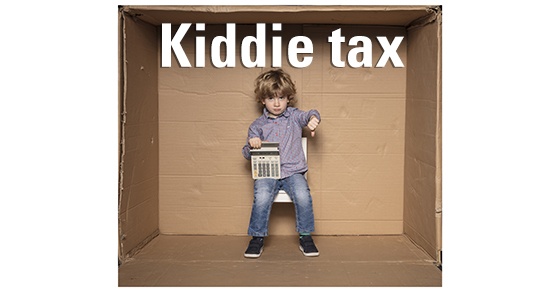 The “Kiddie Tax” Hurts Families More Than Ever

Years ago, Congress enacted the “kiddie tax” rules. These rules prevented parents and grandparents in high tax brackets from shifting income (especially from investments) to children in lower tax brackets. And while the tax caused some families pain in the past, it has gotten worse today. The Tax Cuts and Jobs Act (TCJA) made changes to the kiddie tax by revising the tax rate structure.

History of the “kiddie tax”

What about the kiddie tax rate? Before the TCJA, for children subject to the kiddie tax any unearned income beyond a certain amount was taxed at their parents’ marginal rate. This was assuming it was higher, rather than their own rate, which was likely lower.

The TCJA doesn’t further expand who’s subject to the kiddie tax. But it has effectively increased the kiddie tax rate in many cases.

For 2018–2025, a child’s unearned income beyond the threshold ($2,200 for 2019) will be taxed according to the tax brackets used for trusts and estates. For ordinary income (such as interest and short-term capital gains), trusts and estates are taxed at the highest marginal rate of 37% once 2019 taxable income exceeds $12,750. In contrast, for a married couple filing jointly, the highest rate doesn’t kick in until their 2019 taxable income tops $612,350.

That means that in many cases, children’s unearned income will be taxed at higher rates than their parents’ income. As a result, income shifting to children subject to the kiddie tax won’t save tax. It could actually increase a family’s overall tax liability.

Note: For purposes of the kiddie tax, the term “unearned income” refers to income other than wages, salaries, and similar amounts. Examples of unearned income include capital gains, dividends, and interest. Earned income from a job or self-employment isn’t subject to kiddie tax.

One unfortunate consequence of the TCJA kiddie tax change is that some children in Gold Star military families are affected. These children’s parents were killed in the line of duty and are being assessed the kiddie tax on certain survivor benefits from the Defense Department. In some cases, this has more than tripled their tax bills because the law treats their benefits as unearned income. The U.S. Senate has passed a bill that would treat survivor benefits as earned income but a companion bill in the U.S. House of Representatives is currently stalled.

To avoid inadvertently increasing your family’s taxes, be sure to consider the kiddie tax. This is especially important before transferring income-producing or highly appreciated assets to a child or grandchild. If you’d like to shift income and you have adult children or grandchildren no longer subject to the kiddie tax but in a lower tax bracket, consider transferring assets to them. If your child or grandchild has significant unearned income, contact us to identify possible strategies. We can try to help reduce the kiddie tax for 2019 and later years.